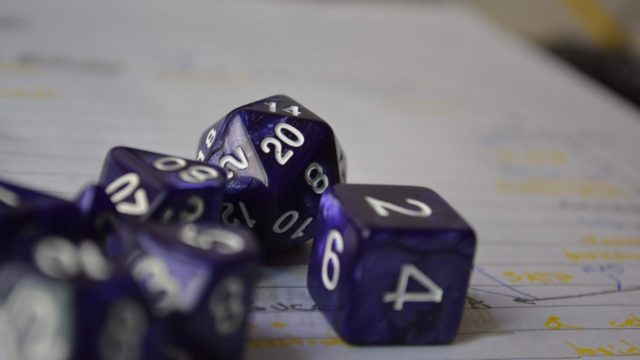 I have experience designing creatures, scenarios, and rules for new and established games. I have a small publishing company, Peculiar Books, and also work on projects freelance. Please contact me if you’re interested in my writing!

CypherCaster Issue 009 – Waters of Deleon
In this issue of the Cypher System Fanzine, I wrote a scenario for Numenera, where a team is sent to investigate why a town that supplies a special healing elixir has suddenly gone silent.

CypherCaster Issue 010 – The Stellar Sounding
In this issue of CypherCaster, I submitted a festival for the Redfleet, a group in the Ninth World. It includes festival games, foods, activities, and people to run into.

Fantasy Ancestries
In most fantasy games, the decision of which heritage you follow is fairly static. All dwarves are taciturn and strong and all elves love nature and are agile. What I love about the flavors introduced in the Cypher System is that they allow you to really pick and choose what traits you want your character to have. Fantasy Ancestries uses flavors to give you options when building your character, and while leveling up to decide what parts of their culture exist for them, and what they value most.

What Lives Must Feed
A small mid-western town was nearly wiped out after a blight killed their crops and ruined their fields. Now, ten years later, Golden is well on its way to recovery. Except for the recent string of violent murder-suicides. In a town reeling from tragedy, one team finds itself in place to investigate what is behind all of the violence, and try to stop it before it claims more lives.
What Lives Must Feed is horror scenario for the Cypher System and contains six pre-generated characters.

When the Light Goes Out
Standing forgotten on the Oregon coast, a beacon for lost sailors helps conceal a town’s secrets, and an insidious evil. The Widow’s Peak Lighthouse has been a landmark for travelers near the Witch’s Cauldron State Natural Area for nearly 150 years. Closed to the public, it’s been the source of many local legends. Recently it went up for sale, and the bidding between the locals and a reclusive millionaire was vicious. However, money won out over local interests, and members of the party have been hired to help with the restoration and study of the lighthouse. As they work to restore the building, they find more and more things that should not be.
When the Light Goes Out is a modern Call of Cthulhu scenario and contains six pre-generated characters.

13 Demon Princes – The Demon Of Pestilence, Who Gathers Illnesses, Parasites, And Plagues Like Fine Pieces Of Art
I’m so excited that I got to contribute a demon to Taylor LeBresh’s dating game. I can’t wait to share the Demon of Pestilence with everyone. Coming soon from Riverhouse Games.

Cut to the Chase – Though They Be But Little…
Continuing my fascination with things microscopic, I wrote a scenario for Cut to the Chase involving a disease and the immune system. Coming soon from Mongrel Tabletop Games

Awakened: NPCs and Companions for 5e – Awakened Animal NPCS
I contributed the background and stat-blocks for some adorable NPCs for this project. I was especially excited about Rya, the Dumbo Octopus druid. Coming soon from Metal Weave Games.

Hello! Thank you for checking out my projects! My name is Megan and I love RPGs, fiber art, dice, octopuses and combining those things whenever possible.